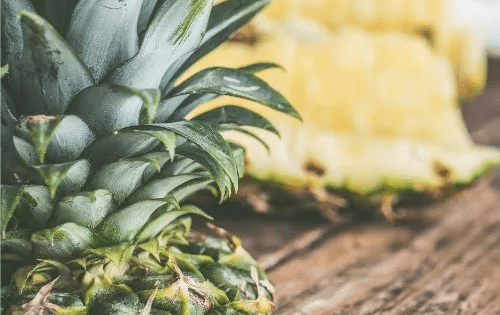 The pineapple is one of the important commercial fruit crops of India. Pineapple is grown abundantly in the North-East region, Kerala, Karnataka, West Bengal, Bihar, Goa, and Maharashtra. The total annual production of pineapple is projected to be 14.6 million tonnes. With an annual output of 1.2 million tonnes, India is the fifth-largest producer of Pineapple in the world. India shares 8.2% of the world’s total pineapple production. Thailand, the Philippines, Brazil, Nigeria, Mexico, Indonesia, Colombia, and the United States are the other significant producers of pineapple.

Varieties of Pineapple in India

Pineapples are available in different shapes and sizes and are cultivated all over the world. Most commercial varieties of pineapple grown in India are Kew, Giant kew, Queen, Mauritius, Jaldhup, and Lakhat. Among these varieties, queen, giant kew/ kew is extensively grown in the northeastern parts of India and is preferred by fruit juice manufacturers.

This is an old cultivar that grows predominantly in India, Australia and South Africa. This is the most processable variety of pineapples in India and is also used as a table variety. The fruit weighs between 1- 1.5kg When the pineapple is fully mature, the fruit turns golden yellow and internal flesh turns deep golden yellow. The flesh is juicy than the other varieties of Pineapple and is crispy. This variety is sweet and has a pleasant aroma. The TSS is 15-16 brix and the acidity is between 0.6 and 0.8%.

Kew is a late-maturing variety and India’s most popular commercial variety of pineapple in India. The fruit is oblong with a slight taper towards the crown and weighs 2-3kg.  It has broad and shallow eyes that make it suitable for canning. The pineapple is yellow when it is fully ripe and the internal flesh is light yellow. The flesh is juicy and fiberless with a TSS content varying from 12-14 brix. The acidity content is between 0.6-1.2%.

These are the local varieties named after the locations where they are produced. These varieties are cultivated for both table and processing purposes Both the varieties belong to the queen variety of pineapple, however, they are smaller in size than a queen. Jaldhup’s sweetness and acidity are perfectly balanced. Jaldhup varieties have a distinct alcoholic flavour that distinguishes them from other queen groups.

Pineapple (Ananas Comosus) is a tropical and subtropical fruit of the Bromeliaceae family that is grown in about a third of the world. The main pineapple growing season in India is from July to September, and it takes roughly 18 to 24 months for the crop to develop enough to harvest. Pineapple is a tropical plant that thrives in humid conditions. It thrives both on the plains and elevations less than 900 meters. The pineapple plant is not tolerant to extremely high temperatures or frost. Pineapple flowers between February and April  Off-season fruit can develop and bear fruit between September and December.

The Pineapple season in India in key pineapple-producing states such as Meghalaya, Kerala, Assam, Tripura, Manipur, and others is from July to December. Kew, Mauritius and queen are also the most cultivated varieties of pineapple in Tamilnadu.

Pineapple cultivation is limited to heavy rainfall and humid coastal regions in peninsular India and magnesium hilly places in northeastern regions. With medium rainfall and supplemental irrigations, it may also be cultivated economically in the interior plans

The Pineapple starts flowering 12-15 months after planting. The fruits start ripening in 15-18 months depending on the variety, planting time, size of the plant material utilized, and the temperature at the time of fruit growth. Under natural conditions, The pineapple harvest time starts from May till August. The fruit ripens after 5 months from the flowering stage. The irregular flowering extends the length of the pineapple harvesting period.

When there is a tiny shift at the base of developing fruits, the fruits are harvested for canning and processing purposes The table fruits are retained until they turn into a golden yellow colour. Depending on the plant conditions, the plant can be kept as a ratoon crop for the period of three to four years after the pineapple harvesting period.

Scope and usage for Pineapple juice

Pineapple is one of the top five flavours in many European countries, including Spain, France, the United Kingdom, Netherlands and Germany. The fruit juices that contain 100% fruit, have grown in popularity among customers all over the world.

The product is separated into five segments based on the application types. Bakery, beverages, dairy, confectionery, and baby foods are among them. During the forecast period of 2020-2026, the beverage is predicted to be the greatest contributor to market growth.

The basic quality requirements for pineapple juice are defined by the following parameters:

Pineapple growing has more economic advantages. The economy also depends on fruit production and per capita consumption of fruits. Pineapple is a good source of Vitamin A, B, C, magnesium, potassium, and iron. The pineapple is consumed fresh or in the form of processed products such as juice, jams, syrup and squash. Among all the processed foods, Pineapple juice contributes to 50% of the consumption.

Pineapple is a well-known source of important nutrients. Nevertheless, its curative capabilities have been used for generations. The recent research has confirmed many of the health benefits of pineapple, including:

Sustainability efforts for the Mango processing Industry by ABC Fruits

No products in the cart.

This will close in 0 seconds

Select the fields to be shown. Others will be hidden. Drag and drop to rearrange the order.
Click outside to hide the comparison bar
Compare
Compare ×
Let's Compare! Continue shopping